Fr. Michael J. McGivney, an Irish-American Catholic priest, gathered a group of men from St. Mary’s Parish in New Haven, Connecticut for an organizational meeting on October 2, 1881 and founded the Knights of Columbus.  Several months later, the Order was incorporated under the laws of the state of Connecticut. The Order spread rapidly in Connecticut, and then throughout New England and the United States.

Fr. McGivney intended the Knights to be a mutual benefit society.  As a parish priest in an immigrant community, Fr. McGivney saw the devastation of families when a breadwinner became sick, disabled or died. There were virtually no insurance or government programs at that time. He wanted to provide for the widows and orphans left behind. Fr. McGivney himself had been forced to withdraw from the seminary to care for his mother and siblings after his own father died.  He was able to return to the seminary only through the charitable support of the Bishop of Hartford who financed the remainder of his education.

Because of religious and ethnic discrimination, Roman Catholics in the late 19th century were regularly excluded from labor unions, popular fraternal organizations, and other organized groups that provided insurance, fraternal benefits and other social services. Fr. McGivney sought to create an alternative organization to make such benefits available to Catholics, and encourage men to be proud of their American-Catholic heritage.

The original insurance system devised by Fr. McGivney gave a deceased Knight’s widow a $1,000 death benefit. Members were assessed $1 upon the death of a brother Knight, until the membership grew beyond 1,000.  There was also a Sick Benefit for members who fell ill and could not work. Originally, each sick Knight was entitled to draw up to $5 a week for 13 weeks.  Eventually, these fraternal benefits grew into one of the country’s largest insurance programs. 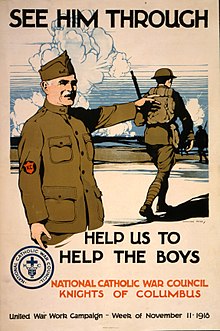 During World War I the Knights supported the war effort and the troops, which mitigated some of the Anti-Catholic sentiment in America. Supreme Knight James A. Flaherty proposed to President Woodrow Wilson that the Order establish soldiers’ welfare centers in the U.S. and abroad. With the slogan “Everyone Welcome, Everything Free,” the KofC “huts” became recreation and service centers for doughboys regardless of race or religion. They were staffed by “secretaries,” who became known as “Caseys” (for the red “K.C.” patches they wore on their sleeves) and were generally men above the age of military service. The centers provided basic amenities not readily available, such as stationery, hot baths, and religious services.  After the war, the Knights became involved in education, occupational training, and employment programs for the returning troops.

After World War I, worries about the influence of “foreign” values spread and hindered the assimilation of immigrants.  Many Americans wanted public schools to teach children to be American, and many states passed laws designed to use schools to promote American culture, such as the Oregon Compulsory Education Act in 1922.  Beneath the surface, however, these laws were aimed at eliminating parochial schools, including Catholic schools. The Oregon law required all children between eight and sixteen years of age to attend public school.  The Knights of Columbus joined forces with the ACLU to fight the law, and the Knights contributed $10,000 to finance the legal challenge.  The case resulted in the famous U.S. Supreme Court decision known as Pierce v. Society of Sisters1 and in a unanimous decision, the Court held that the act was unconstitutional and that parents, not the state, had the authority to educate children as they thought best.

Click here to learn more about the work of the Knights worldwide.

Knights of Columbus Council #81 is a registered 501(c) non-profit organization.