It is with great sadness that Council #81 announces the passing of our brother and past Grand Knight Christie T. Rembetsy, 93, on December 30, 2019.

Christie was one of Council #81’s most valuable assets for decades.  He took his first degree 56 years ago in 1963. He was Grand Knight in 1974 – and again in 1991.  He attended almost every Council meeting right up until about 9 months ago when he began to lose mobility.  Even then, he attended his last few meetings in a wheel chair.

Christie was known for his huge heart and boundless capacity to give his time for others.  He was one of the founders of the Adolescent Psych Ward program at the Westborough State Hospital where Knights put on a cookout in the summer and a Christmas party in the winter for the young patients.  Until this year, Christie hadn’t missed a single visit in 26 years.  He was also a long time volunteer at the V.A. hospital in Bedford on Sunday mornings, pushing wheel chair bound veterans through the tunnels of the hospital to attend Mass at the Chapel.  He continued this mission well into his 80’s.  Many of his passengers were younger than him.

Council #81 was proud to present Christie with a lifetime achievement award at its 125th Anniversary Gala in 2018.  He was, after all, a member for almost 50% of the Council’s existence!

Christie attended St. Matthias Parish in Marlborough where he taught in the Religious Education program and the Confirmation program for over 40 years.  He was also well known to a whole generation of young Catholics all over the City as a volunteer organizer of the Life Teen ministry in the 1980’s and 90’s which was a joint ministry among all four parishes in Marlboro.  He simply never said no when asked to help out with a youth program.  He even coached Little League.

Christie was a Marine in the Pacific in WWII and again in Korea .  He was trained as an engine mechanic and serviced naval fighters on aircraft carriers.  He was honored by the city with a banner displayed downtown this past fall.

In addition to the Knights of Columbus, Christie was a member of the Marine Corp. League.  As their Chaplain he visited sick and home-bound veterans, and honored their service at funerals with military honors.

It seems Christie was present at every youth or veteran-related event in Marlborough. Here he is teaching cub scouts and boy scouts how to salute at the 2009 Veteran’s Day wreath-laying ceremony in Marlborough.

And being honored himself at a parade in Wellesley for Korean War veterans in 2013.

After the war, he earned a degree in mechanical engineering from Northeastern University.  He retired as a mechanical engineer after a long career, having worked on important projects such as the Apollo program.  His niche was building scale models and mock ups of projects under development, and his work is still visible in exhibits at the Boston Museum of Science and Childrens’ Museum. 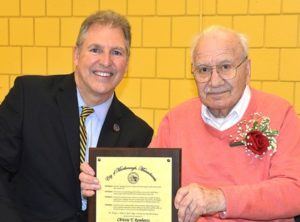 In 2018, the City of Marlborough honored Christie with the Senior of the Year award, an honor given to a senior citizen who contributes to the betterment of the community past age 85.

But most importantly, he was the patriarch of a kind and loving family. His wife Rita died in 2001.

Without a single doubt Christie’s brother Knights are proud to say that he exhibited all of the principles of our Order:  Charity, Unity, Fraternity, and Patriotism.

Funeral arrangements are as follows:

The Rembetsy family has requested donations in Christie’s memory be directed to Council #81, Knights of Columbus, 277 Main St., Marlborough, MA 01752, or you can use the “Donate” button below.

Please feel free to share your memories of Christie below.  Comments will appear after the webmaster has approved them.